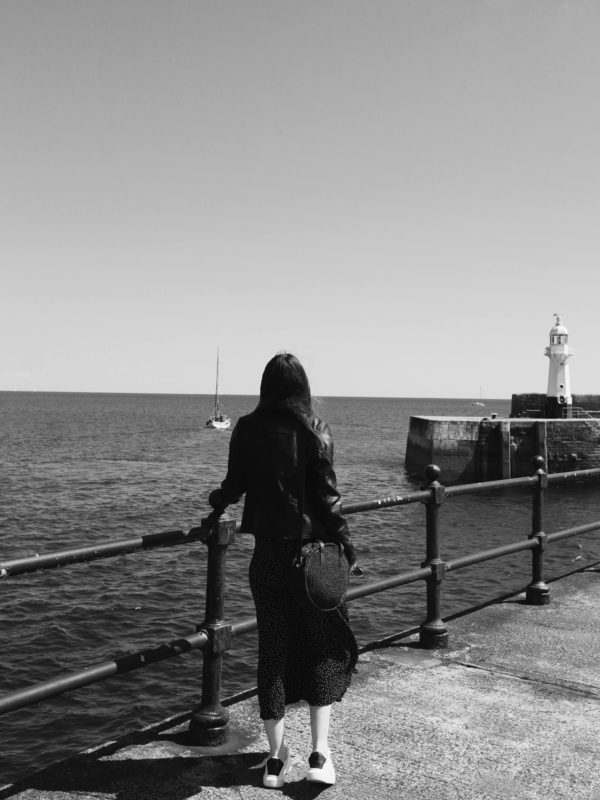 I recently spent a week away in one of my favourite places, Cornwall with my family and it was the perfect break which I really needed and we were so lucky with the weather, it was blue sky and sunny near enough everyday. Oh & to say I took a few photos would be an understatement, I got a little snap happy but I’m really enjoying photography right now and Cornwall was the perfect place to experiment. I’m doing this in two parts because it just seemed too much to put in one post so look out for part two when it comes..

We travelled down on Friday 10th. We wanted to make an early start so that we could explore before getting to where we were staying as we couldn’t check in until 2ish so we started out about 6am stopped for some breakfast at the services and travelled down to Cornwall. We had decided to go to Looe for a few hours as it was only about 30 minutes from where we were staying so we arrived about 11am and then spent a good few hours looking around Looe which is very pretty. 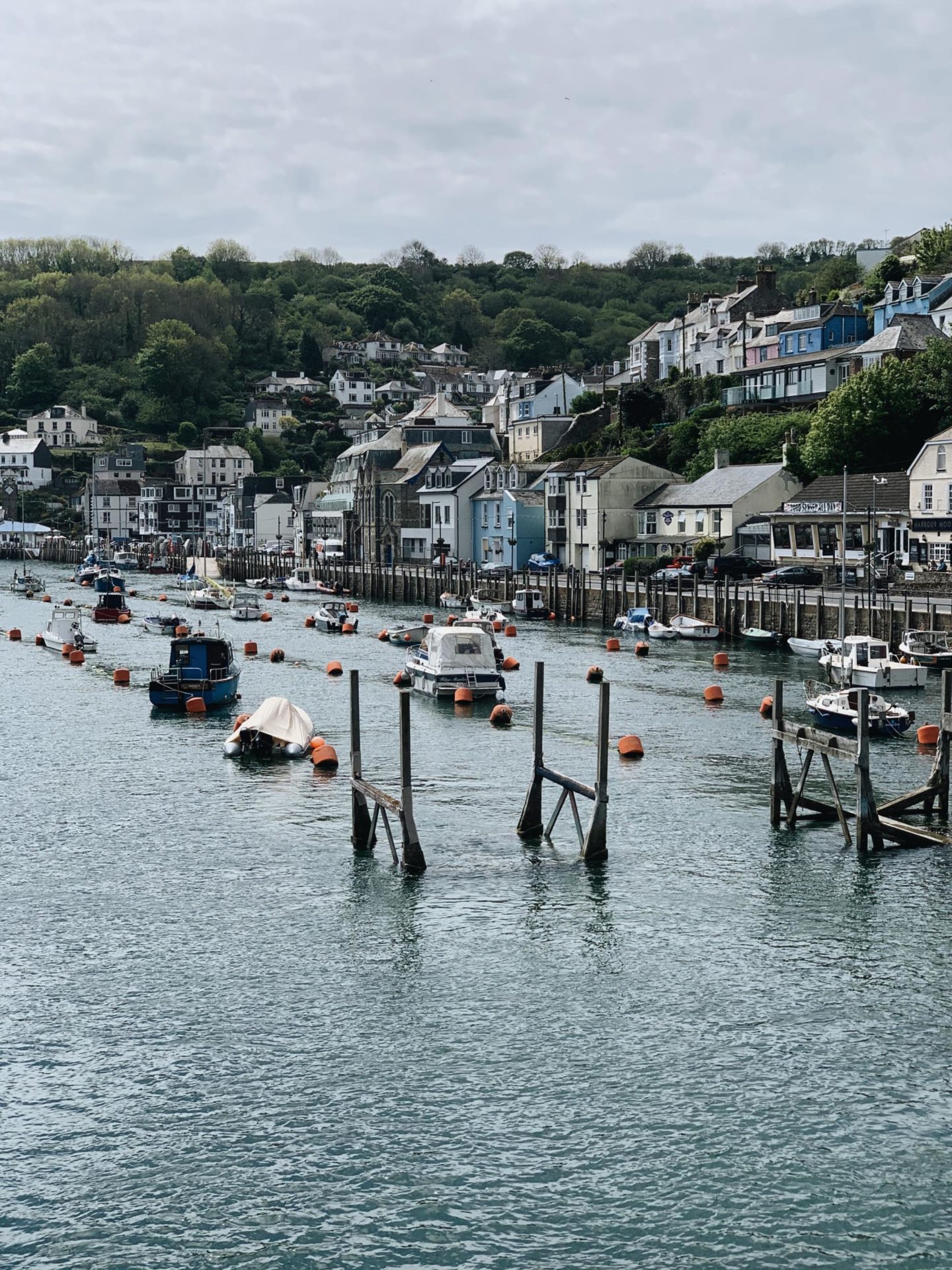 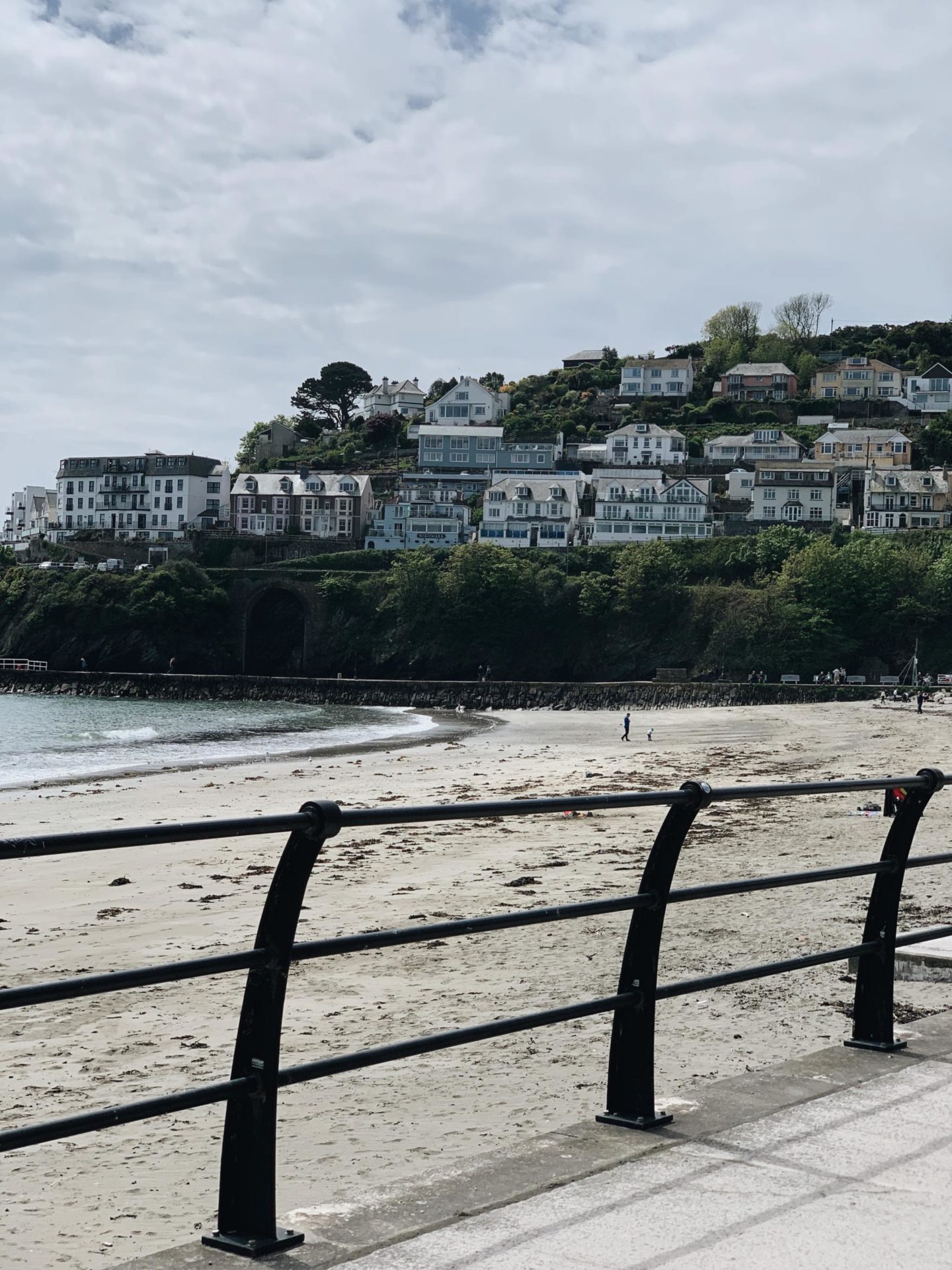 We walked through the little streets until we reached the beach and I couldn’t help but go down and have a little paddle as it was super sunny when we arrived but of course I was the idiot who had put a jumper on because I hate being cold and obviously it was cold at 6 in the morning.. We grabbed some fish and chips from Kelly’s which is the BEST fish and chip shop so just a recommendation if you ever go to Looe then headed back to the car to go and drove to our accommodation for the week.

We had chosen a little village called Portwrinkle which was located in North Cornwall. When I was younger we used to go to Cornwall for holidays most years and we would normally stay in the south but we chose the north because we’d found the most beautiful house and even though we would have to travel a lot to get to the places we wanted to visit we didn’t care because the house was just the cutest. I mean who wouldn’t want to wake up to this view.. 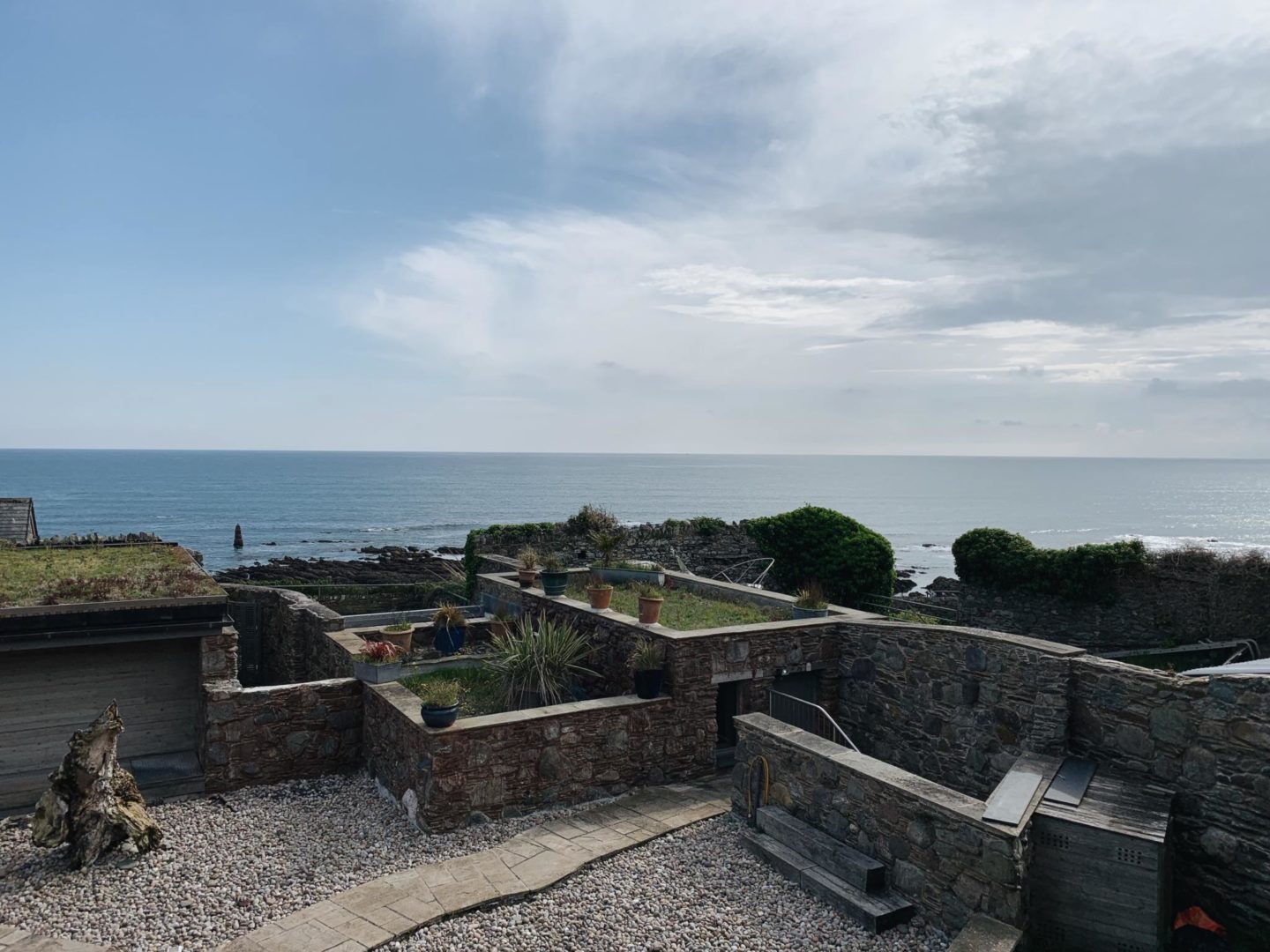 We could walk out of the door from our house and be at the beach in seconds, It was literally just down a ramp and we could hear the waves from our rooms. I couldn’t recommend this house anymore and it was perfect for the five of us.

We were all pretty much exhausted from travelling and unpacking etc. but I decided to take a walk with my mom on the beach and it was just the loveliest end to a long day. 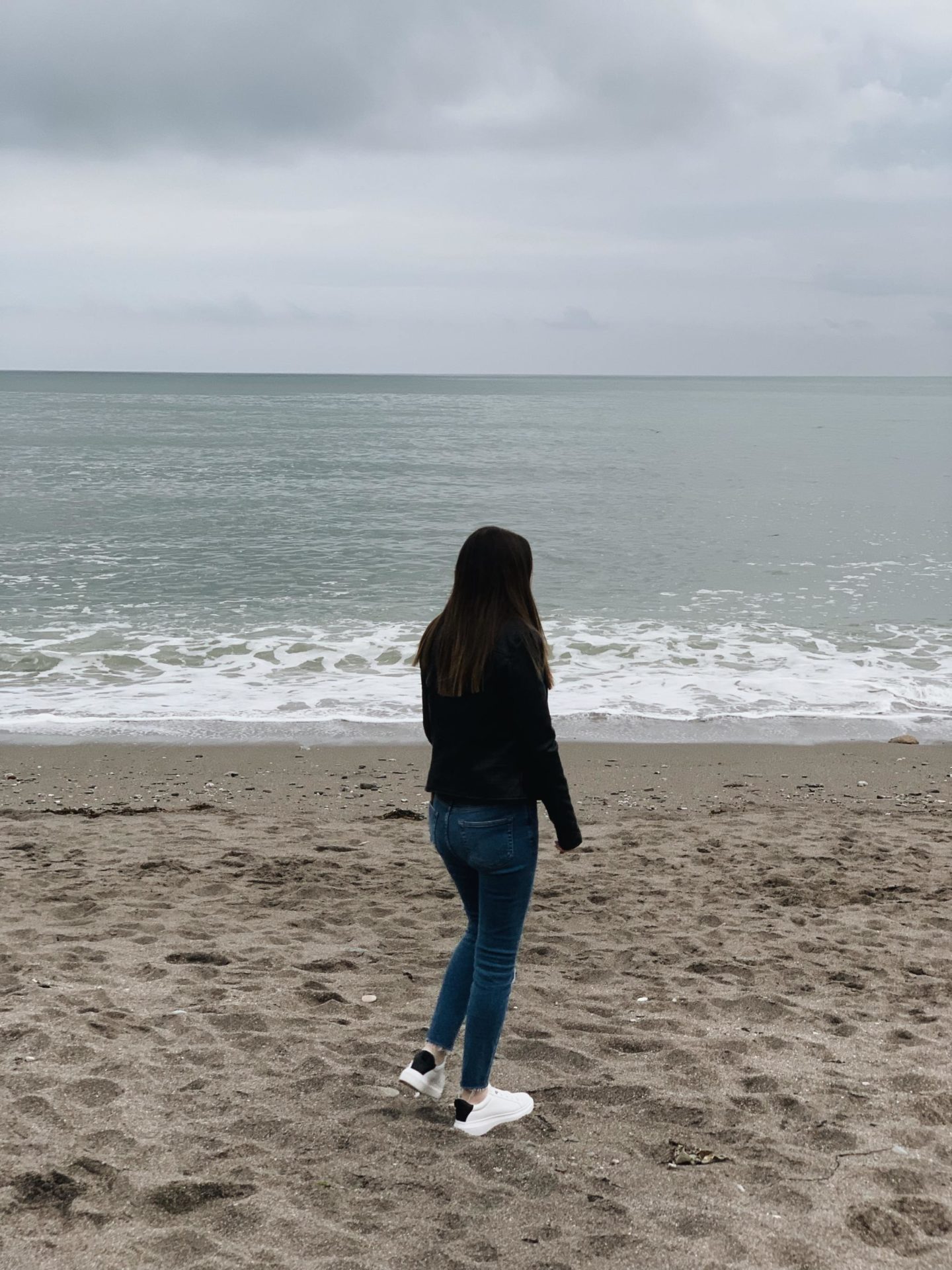 On our first full day in Cornwall, we had decided to explore St Austell and Mevagissey. St Austell was about a 50 minute drive away from the house so wasn’t too bad of a drive and we arrived about 11ish I think. I didn’t really remember much about St Austell from when I was younger, to be honest I wasn’t that impressed although we did just stay around the town and didn’t venture very far out so I can’t say much about it. I actually didn’t take any photos of St Austell as we only spent a couple of hours there, we mainly did some shopping and went for a bit of food and then decided to head back to the car. 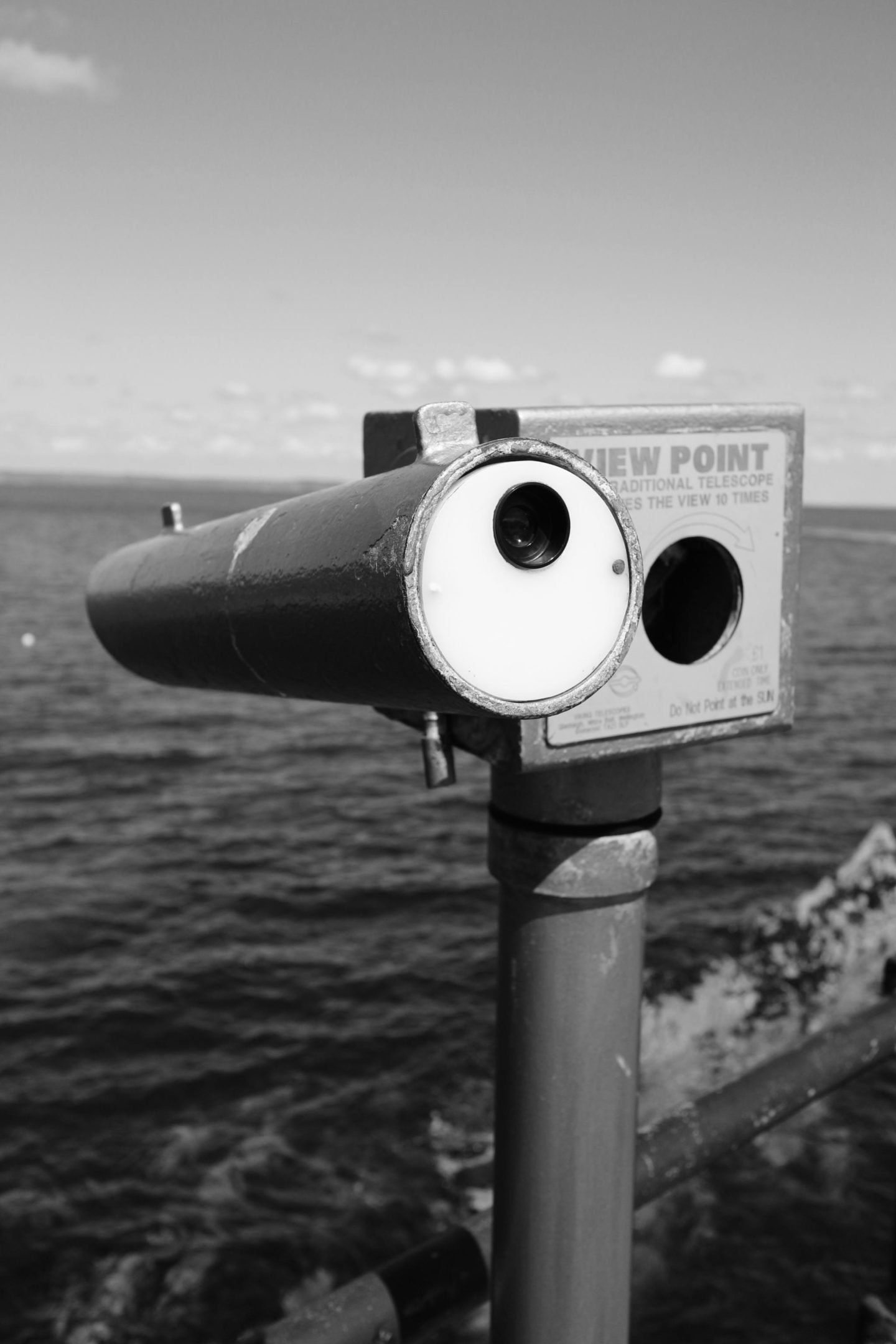 From St Austell to Mevagissey it took about 20 minutes as they are quite close to each other. The weather at this point was super sunny, a little windy but really nice to walk around.

Walking the through the little streets of Mevagissey, it really took me back to my childhood and Mevagissey is one place where I could remember a lot from. The fishing harbour was just beautiful with the blue sky. Once we had walked from the car park through the streets looking at all the cute little shops, you reach the harbour with ice cream shops, restaurants and even more little cute stores. Of course we had to get an ice cream so that’s what we did and then found a bench and just enjoyed the view for a while. 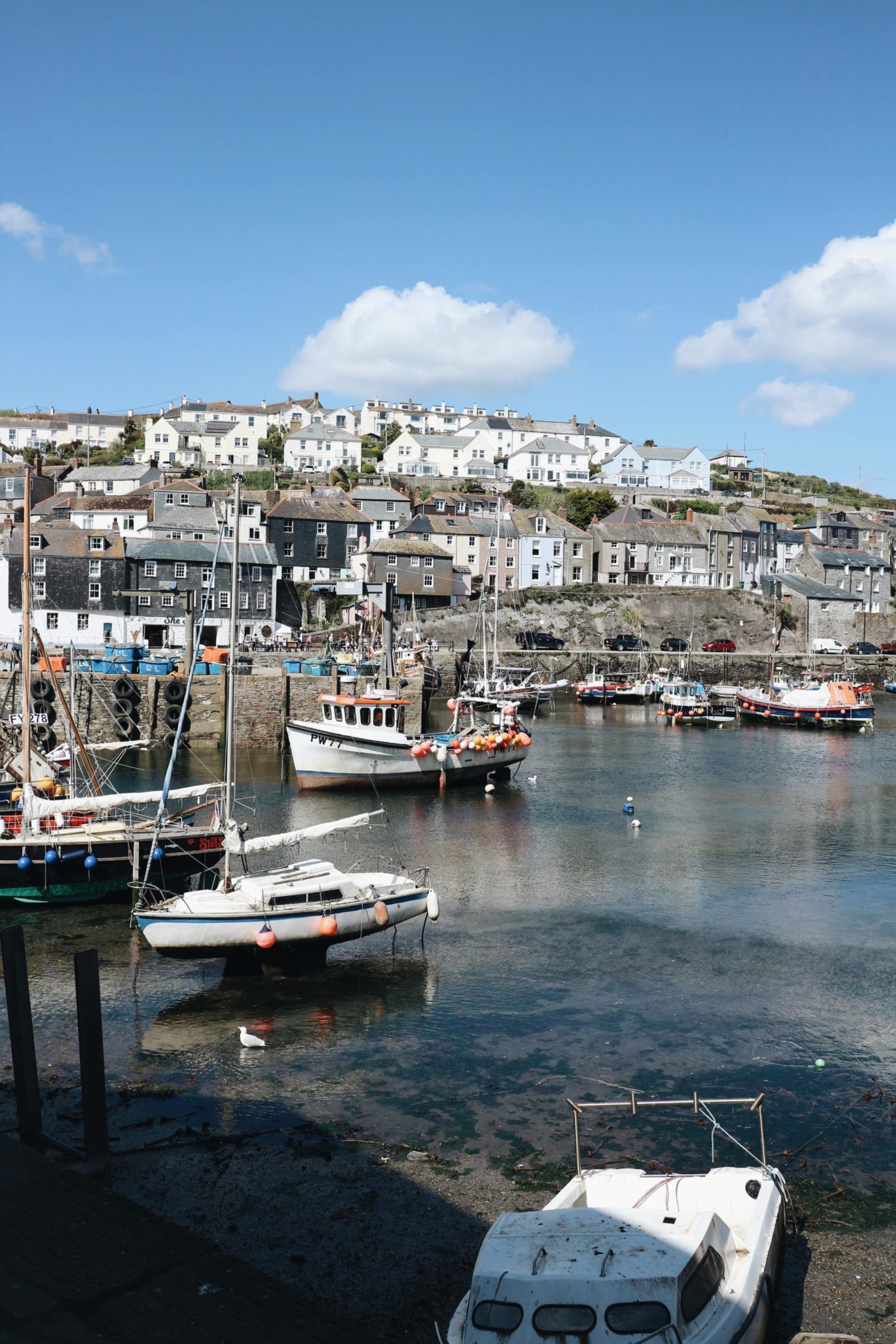 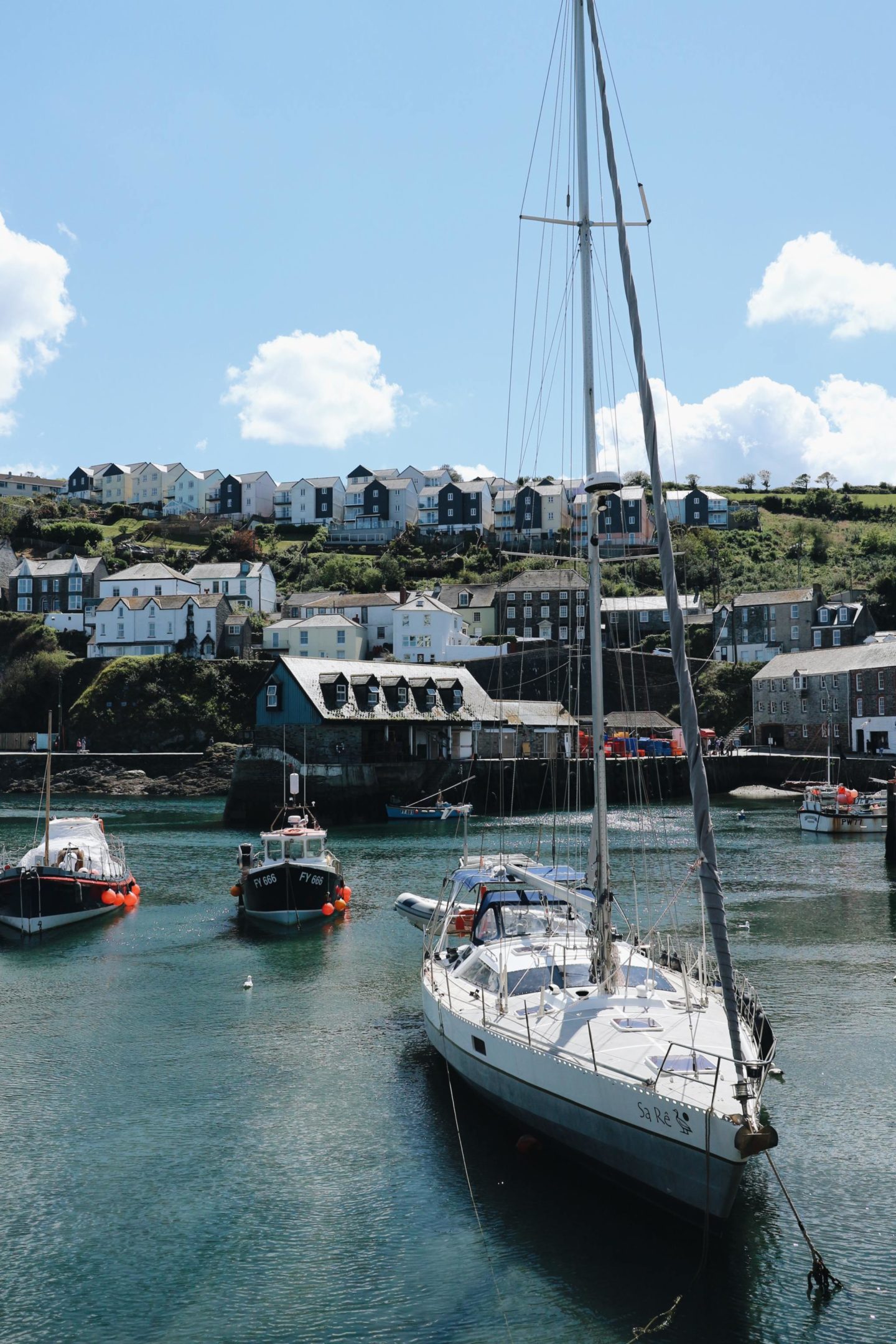 We then took a little walk down to the end where you could see the sea and the views were just beautiful. I loved my outfit but I did kind of regret the skirt once we got to the end of the harbour and towards the sea because it was VERY windy. I had to keep holding it down as I was walking to keep it from blowing up, it wasn’t the best but otherwise the views from the harbour were just stunning.

We had a stroll back through all the shops and I picked up a couple of little trinket pieces like a pen with my name on (I’m very lucky that I can get stuff with my name on) and some food bits.

I could quite happily live in Mevagissey, it’s my perfect place because it’s got the cutest little streets and houses, the beautiful harbour and then it’s right by the sea. I mean could it get anymore perfect? I’m pretty sure we ended the night playing games in the games room which was so much fun. 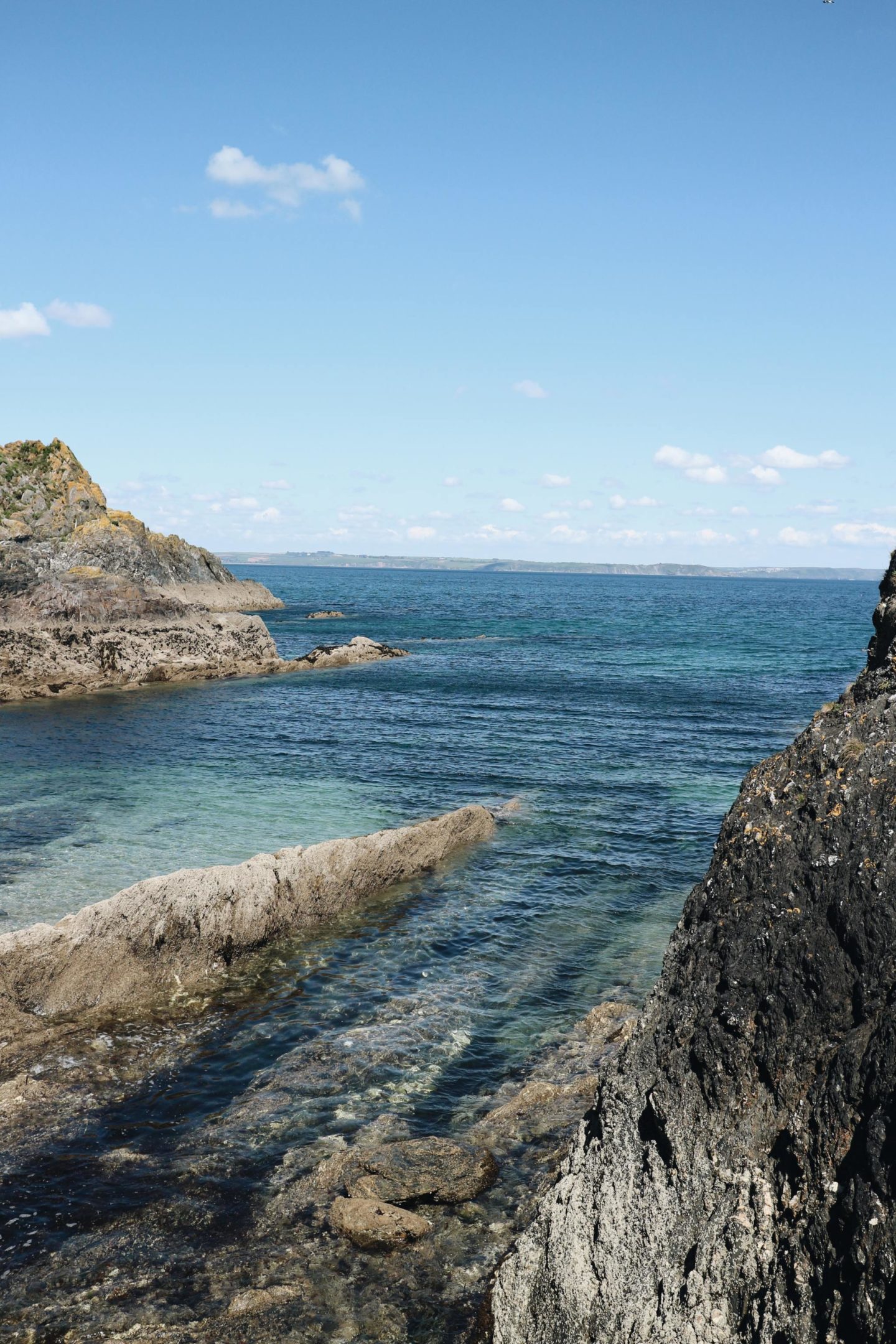 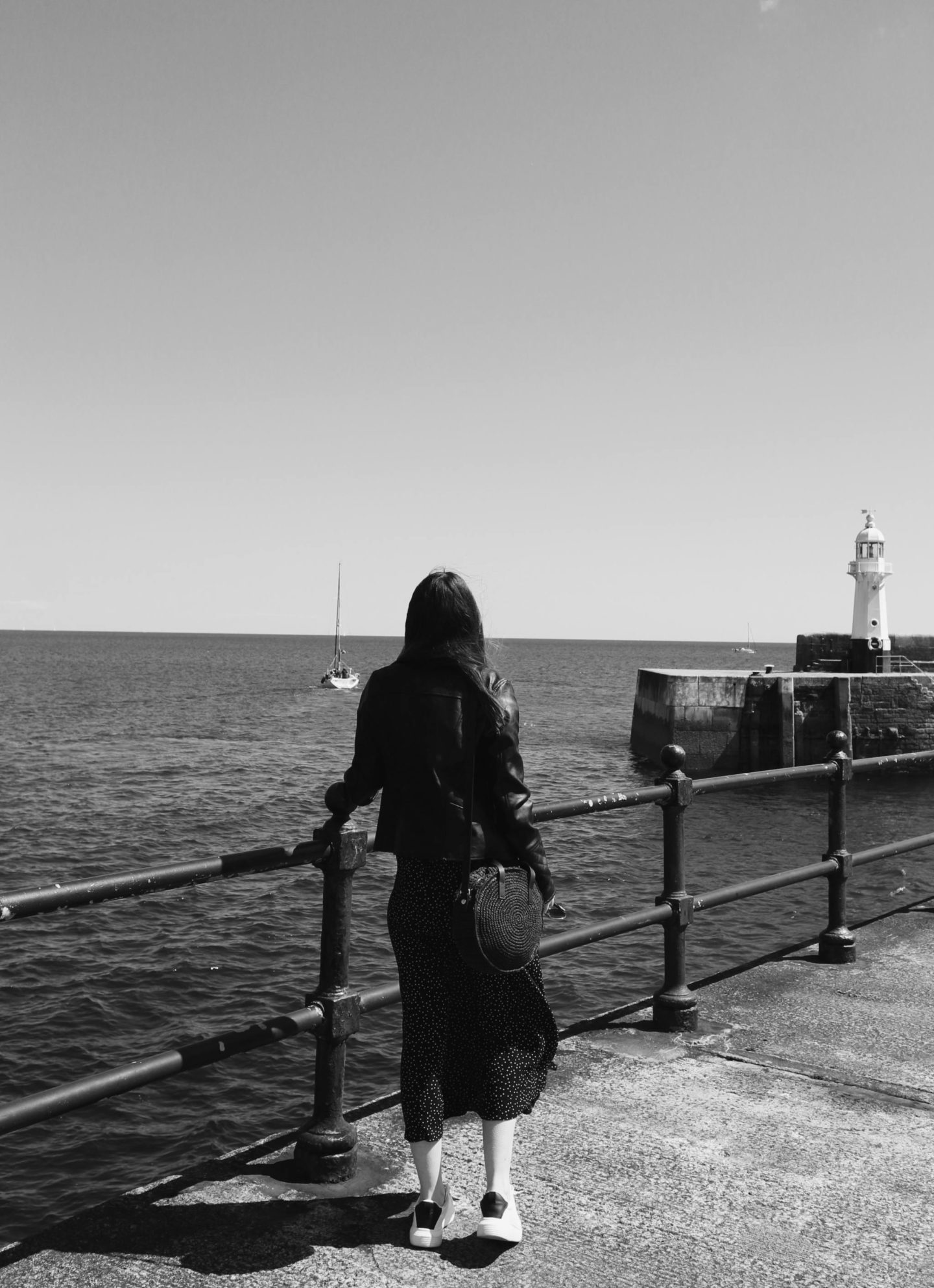 On Sunday, we had decided to make the long trip down to Newquay. It did take a long time to get down and we didn’t arrive until 11:30 so the journey took up a good chuck of the morning but when we arrived the sun was shining so I wasn’t too bothered. The weather honestly couldn’t have been better for the whole trip, we were so lucky.

As Newquay is one of the biggest towns in Cornwall, we spent an hour or so looking in the shops and I managed to spend some money in Watershed which has amazing quality clothes, if you are ever down in Newquay definitely pop into their store. In my defence though they had a 3 for 2 offer on so it would have been rude not to buy anything, well that my excuse anyway. 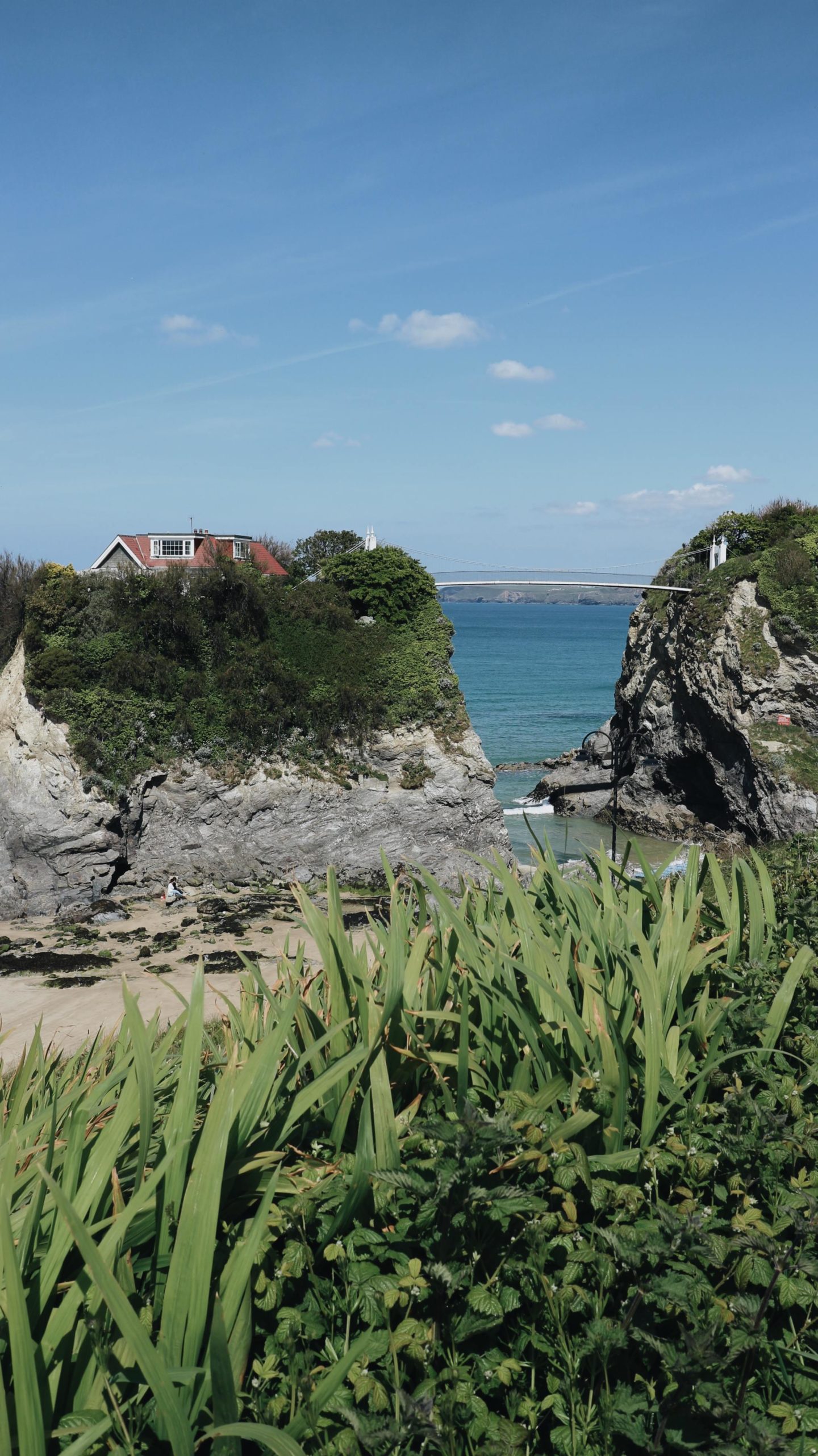 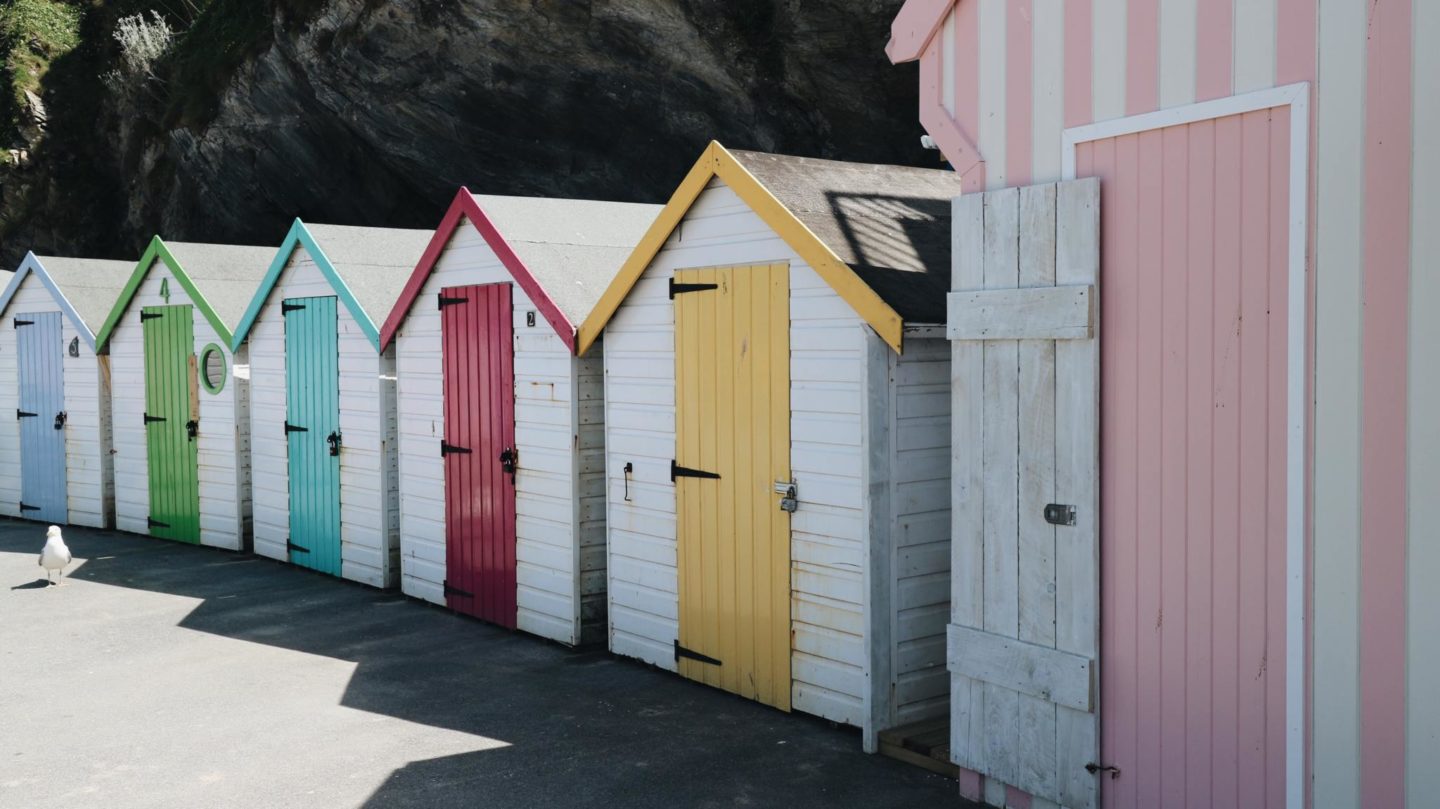 After spending some money, me and my sister noticed some amusements, we used to spend so much money in them when we were younger but you can not go to a seaside place where there’s amusements and not go in so we relieved our childhood and had so much fun. Those 2p machines are addictive. Oh & we did manage to get enough tickets for a few little prizes if you were wondering.

As Newquay has a beautiful beach we walked down to take a few photo’s, I’d heard they had some beach huts but didn’t have a clue where they were and as we headed down some stairs I noticed them and I just had to get a pic for the gram’ of course. 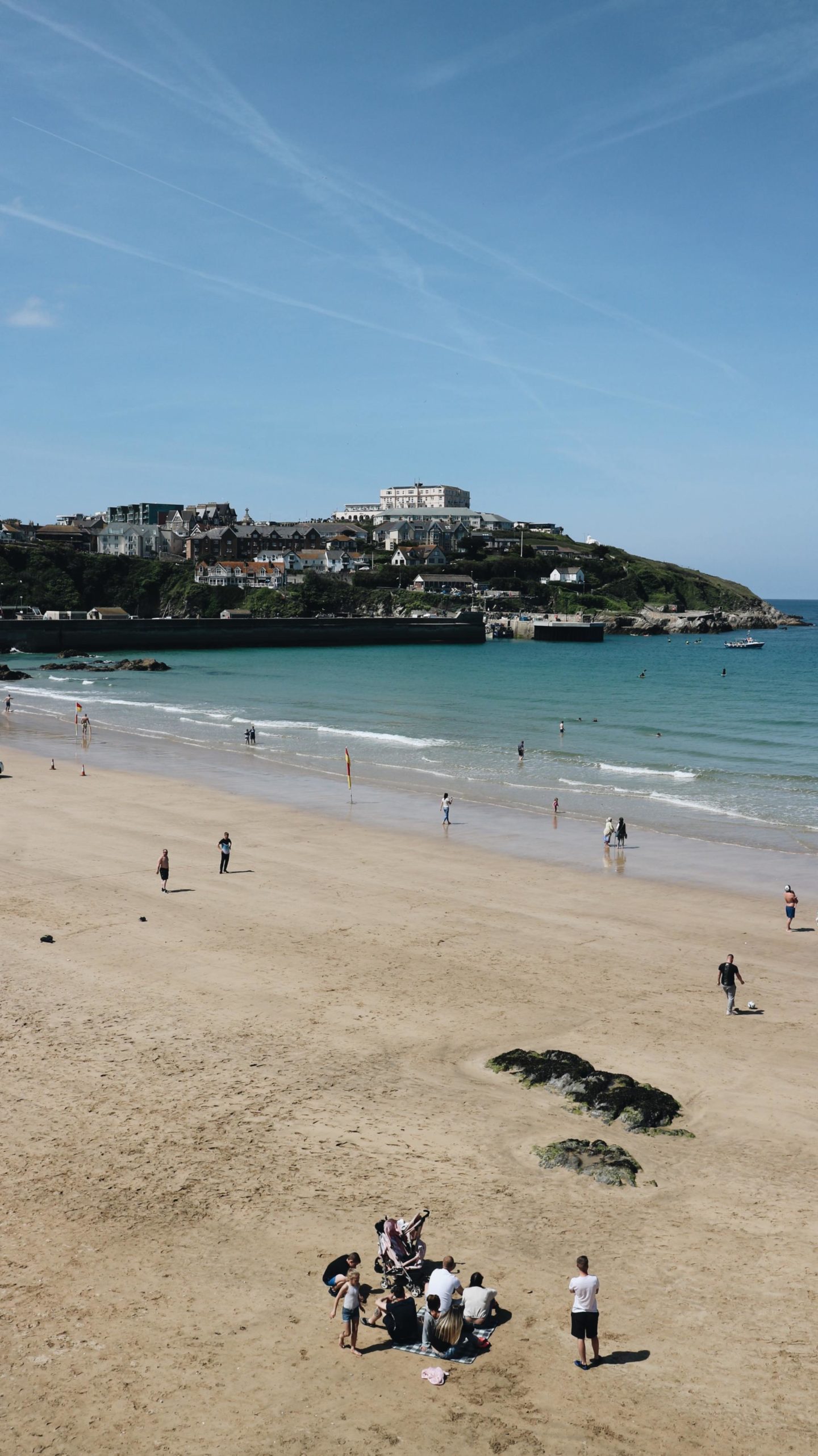 On the way back home we wanted to stop at Healeys Cider Farm as we had visited there years ago and the cider is just 👌🏼. We paid to go on a tractor tour but had to wait about 40 minutes until it was ready so we took a walk around the grounds and found a few animals and popped in to a jam shop and tried a few samples, it was the perfect way to fill the time while waiting for the tour. 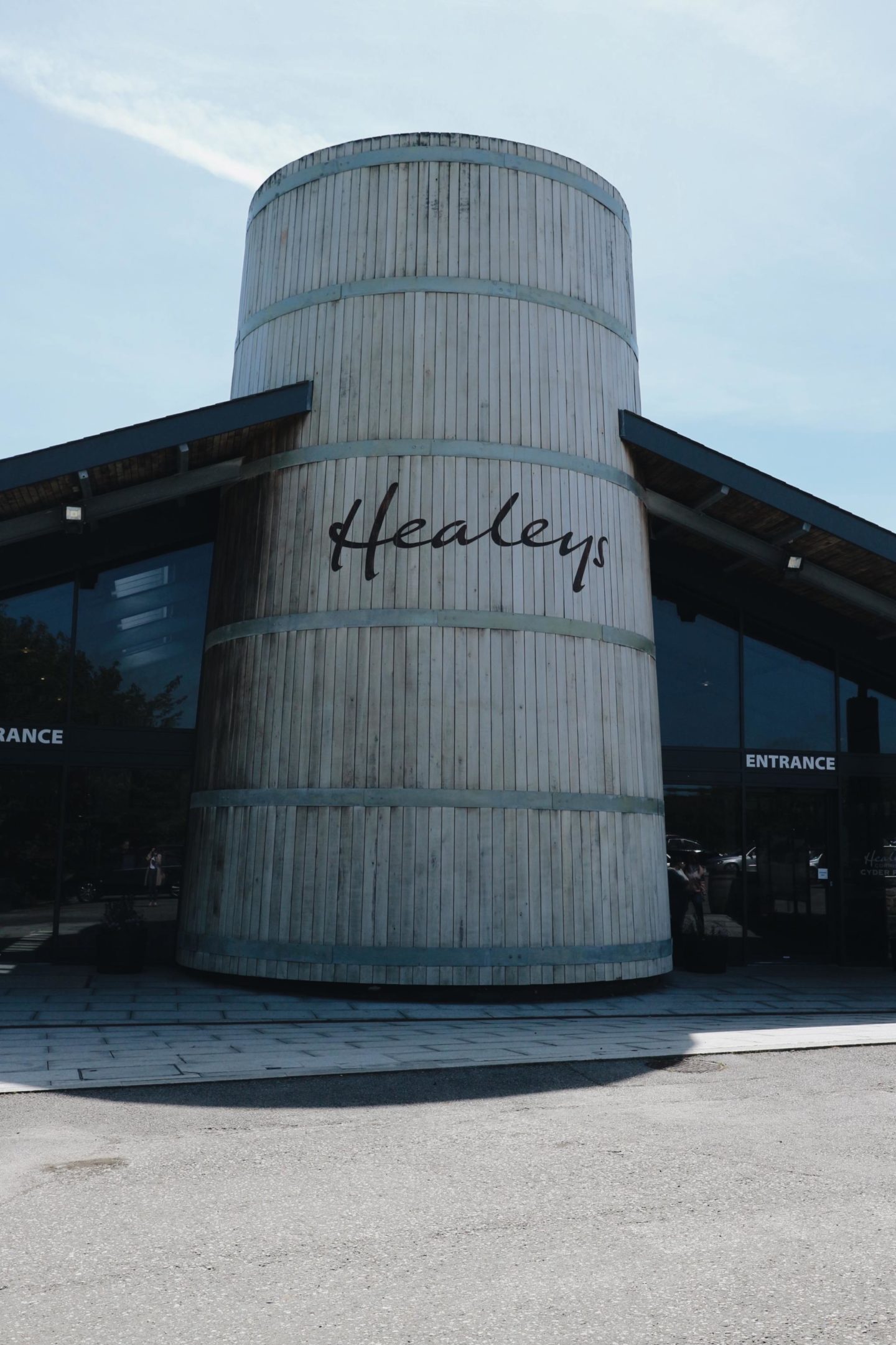 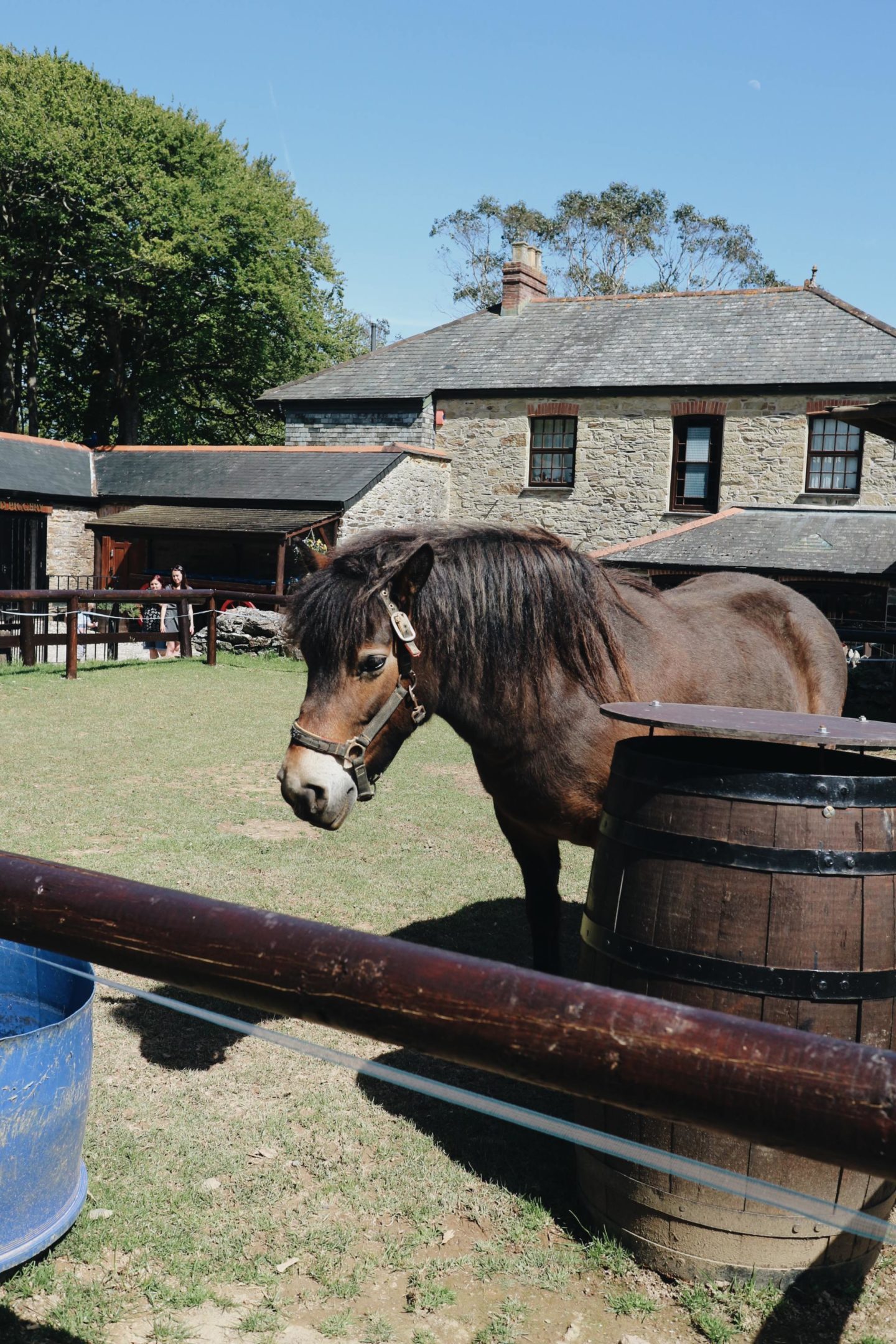 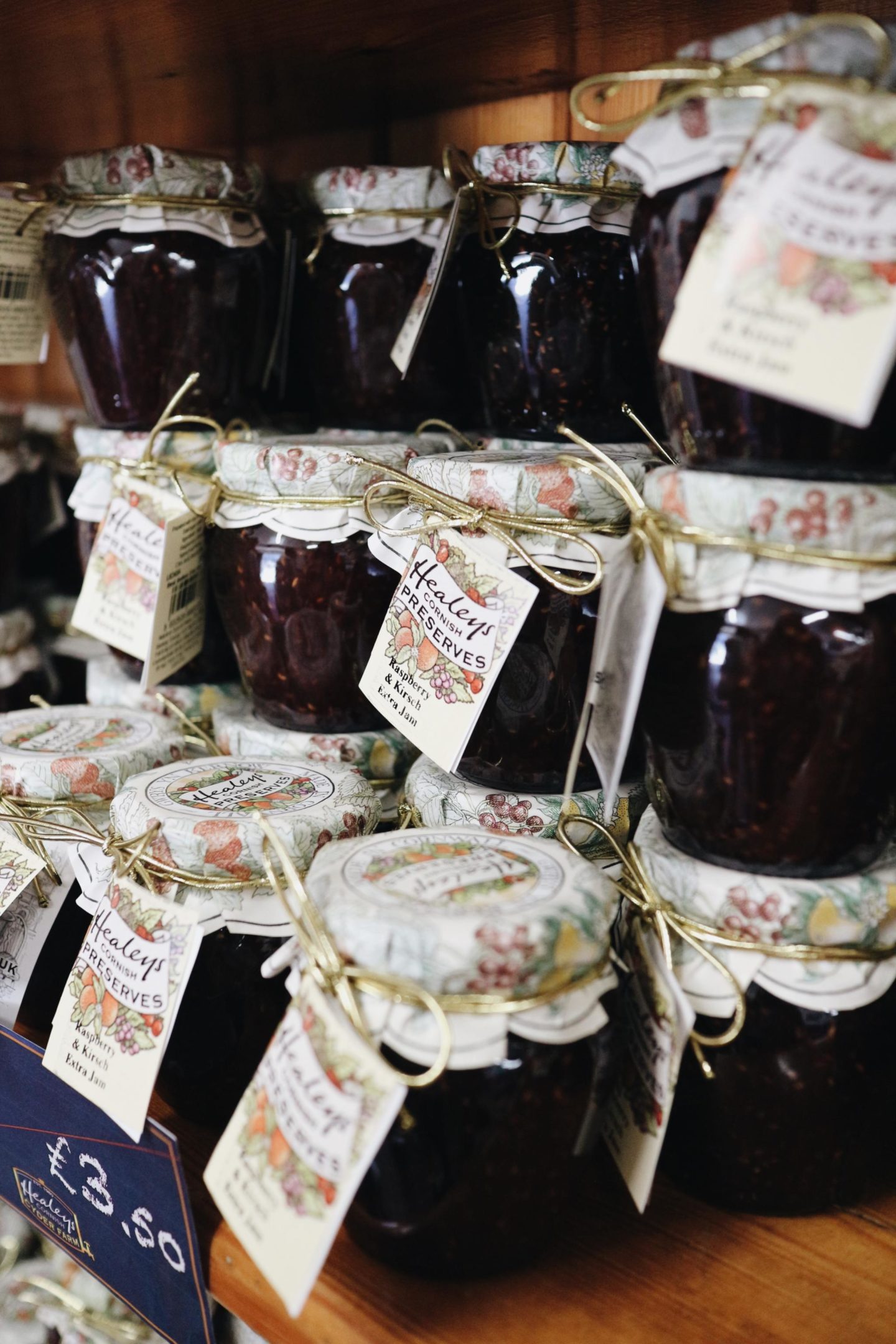 I did actually remember Healeys from when we visited before, maybe it was the animals but it was really lovely to see the farm again. I can imagine it would be more fun for kids because even though it’s a cider farm they do really make an effort for the children which was really nice to see.

The tractor ride was around the beautiful orchards, although it was lovely to see the trees I would have preferred to come at a different time as the harvest time is September to November so apples weren’t on the trees and even though you could see some blossom they weren’t fully out. I can only imagine how beautiful they would look in season. 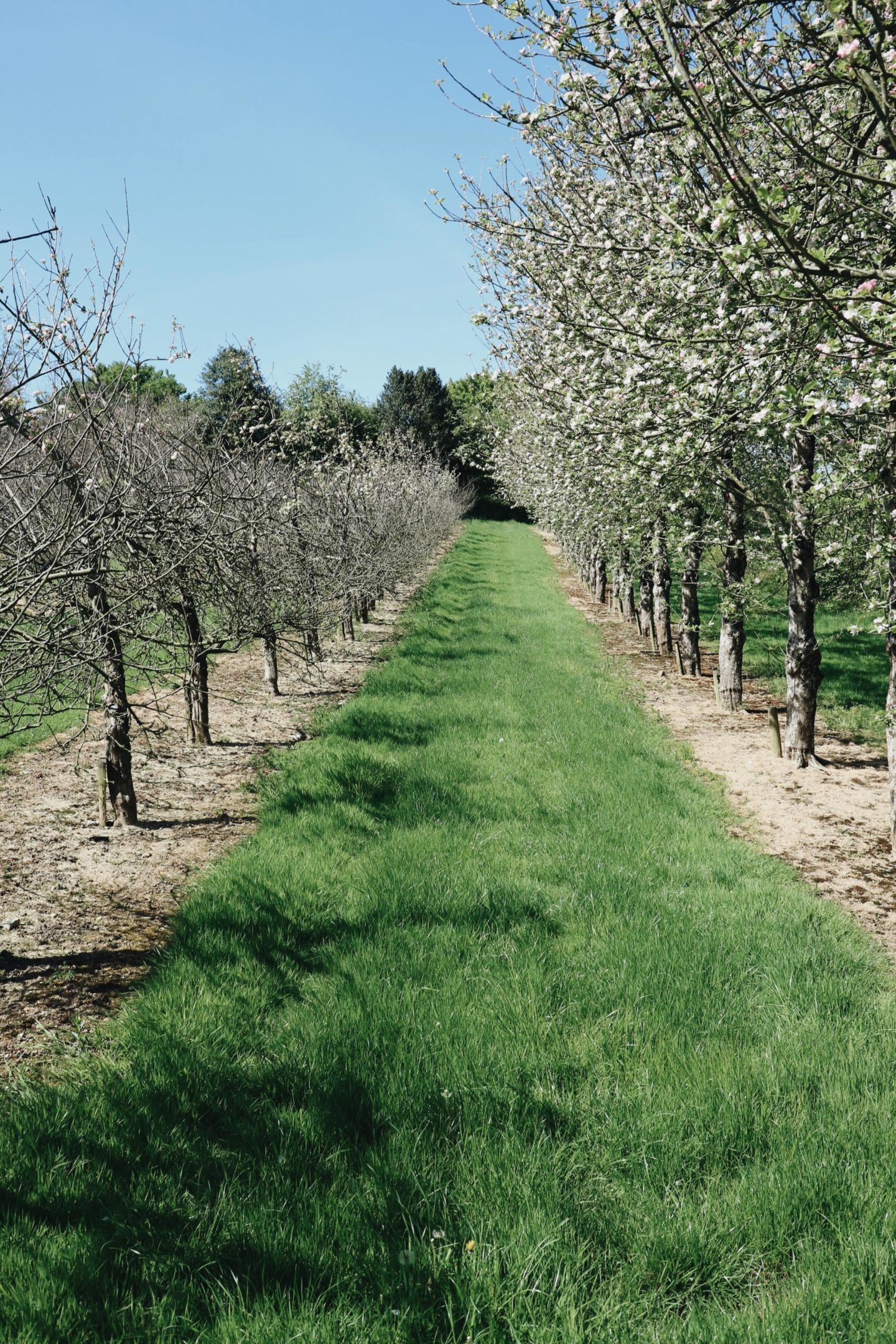 After the 15 minute tractor tour we headed inside to sample a few of the ciders and wines that Healeys sell and they tasted so good. Everyone picked up a few bottles then we headed home all so tired because of the travelling although that night about 8pm me and my mom decided to talk a walk down to the beach and catch the sunset and it was just beautiful, even though we were both exhausted watching the sunset was just the perfect end to one of the best days. 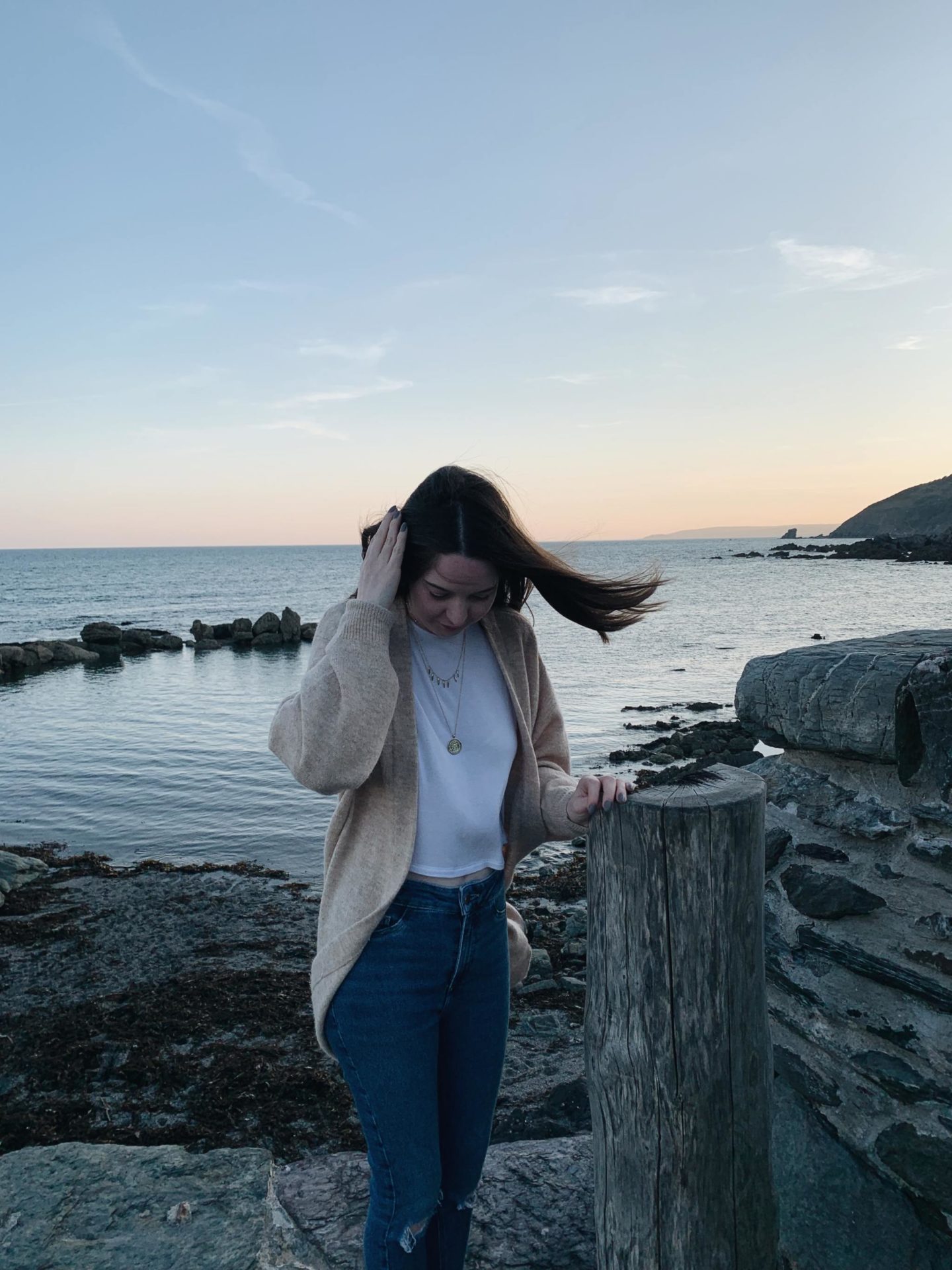 By Monday we were all starting to get really tired, who would have thought a holiday could exhaust you so much anyway we looked at the weather in the morning and it was going to be another beautiful day so we drove down to Padstow, a little town and fishing port.

I actually couldn’t believe how busy Padstow was, it was crazy. Again, like Mevagissey it had little cobbled streets with all the pretty cute little shops but I found Padstow a lot more cramped, I mean the shops were a lot more together, wether that’s because it was so busy and I’m not saying it was a bad thing because I loved Padstow and it’s somewhere I’d love to visit again but I just found it a lot more together if that makes sense. 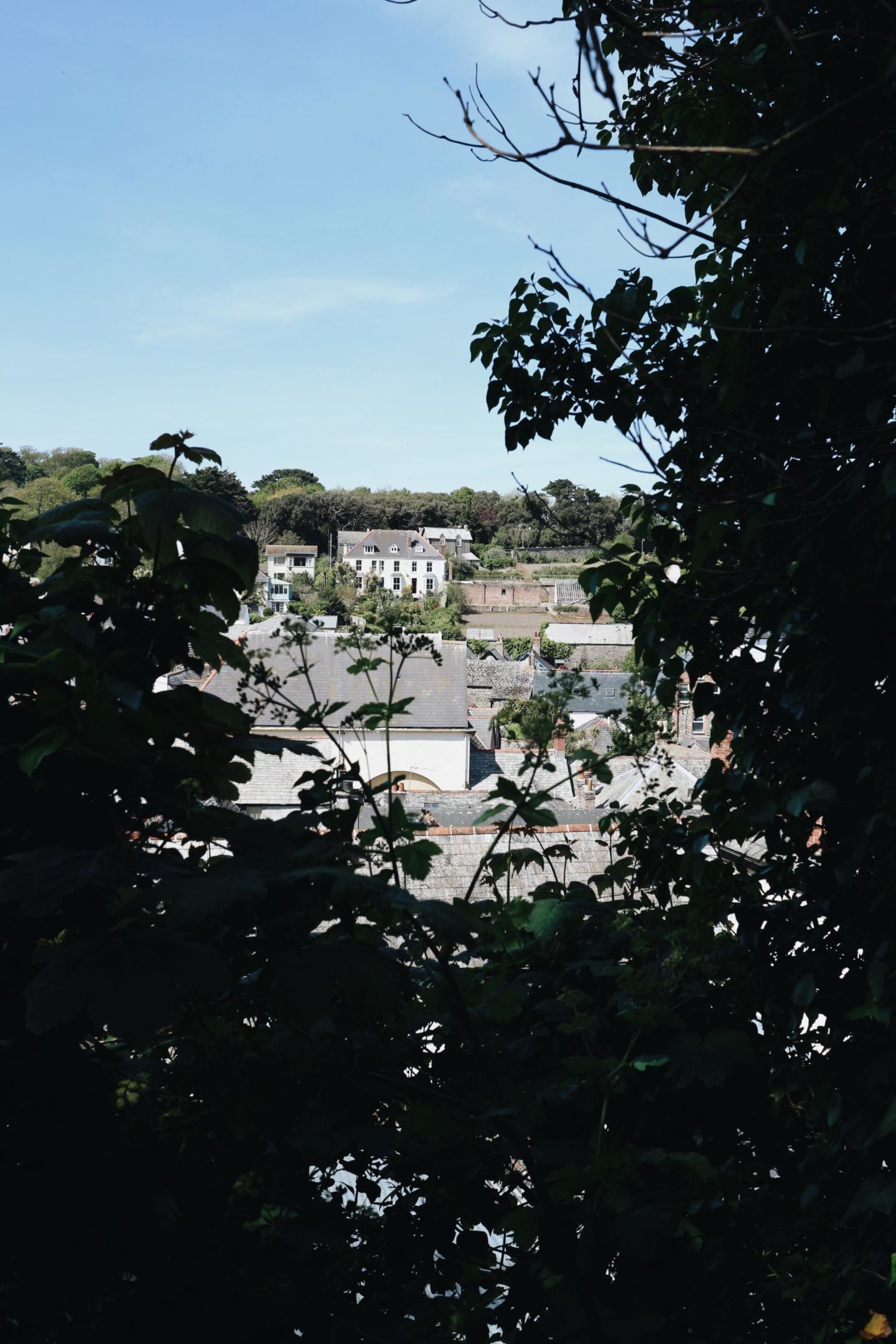 We spent a good couple of hours looking around and taking photo’s. We found this one store, kind of like a car boot but it had some really lovely peices in and I found some really old binoculars, I love collecting old camera’s etc so this was like heaven to me.

Mini golf is one of my favourite things to do while on holiday so I was very excited to play even though I didn’t win (well done grandad) I really enjoyed it, I couldn’t have laughed anymore than I did. 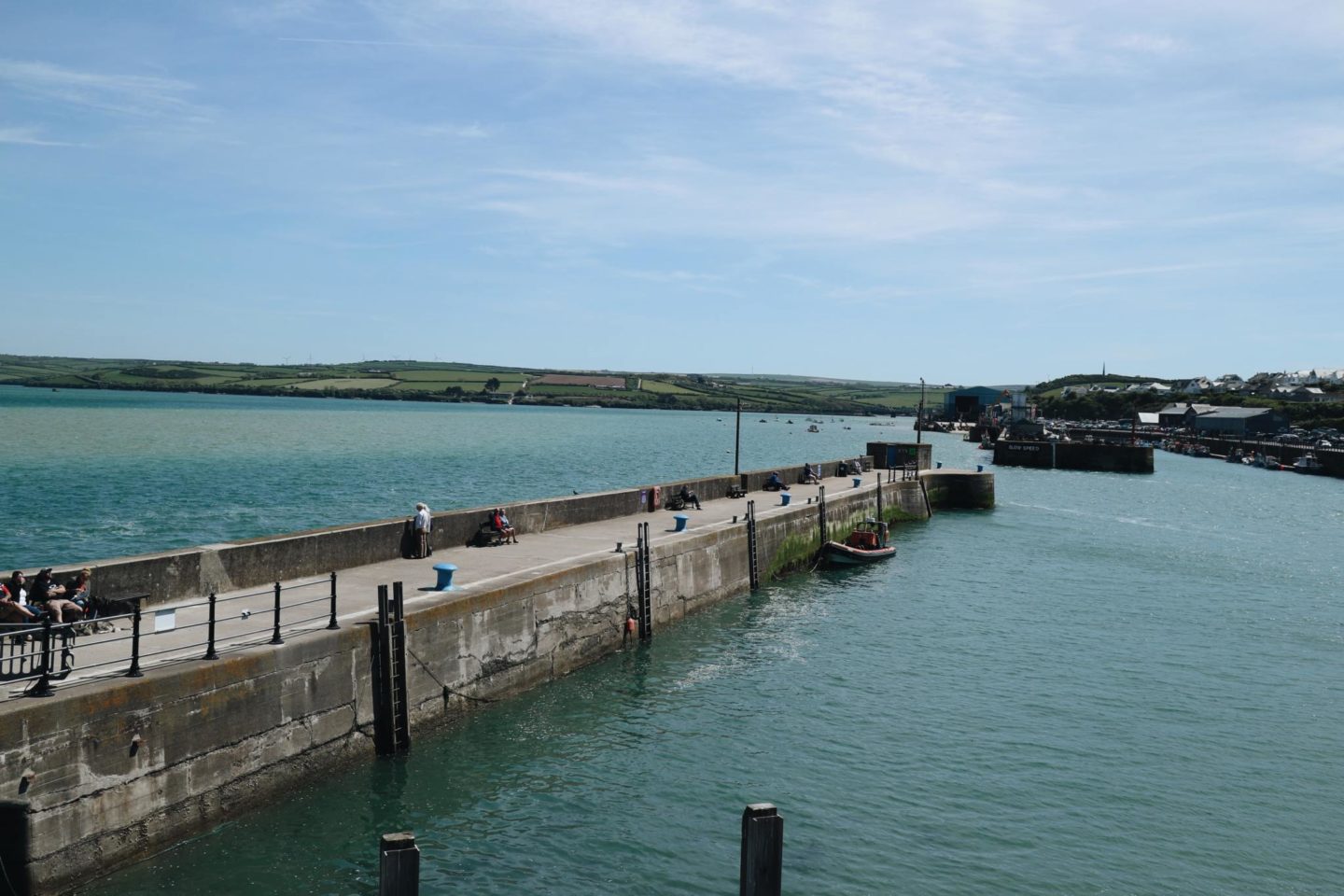 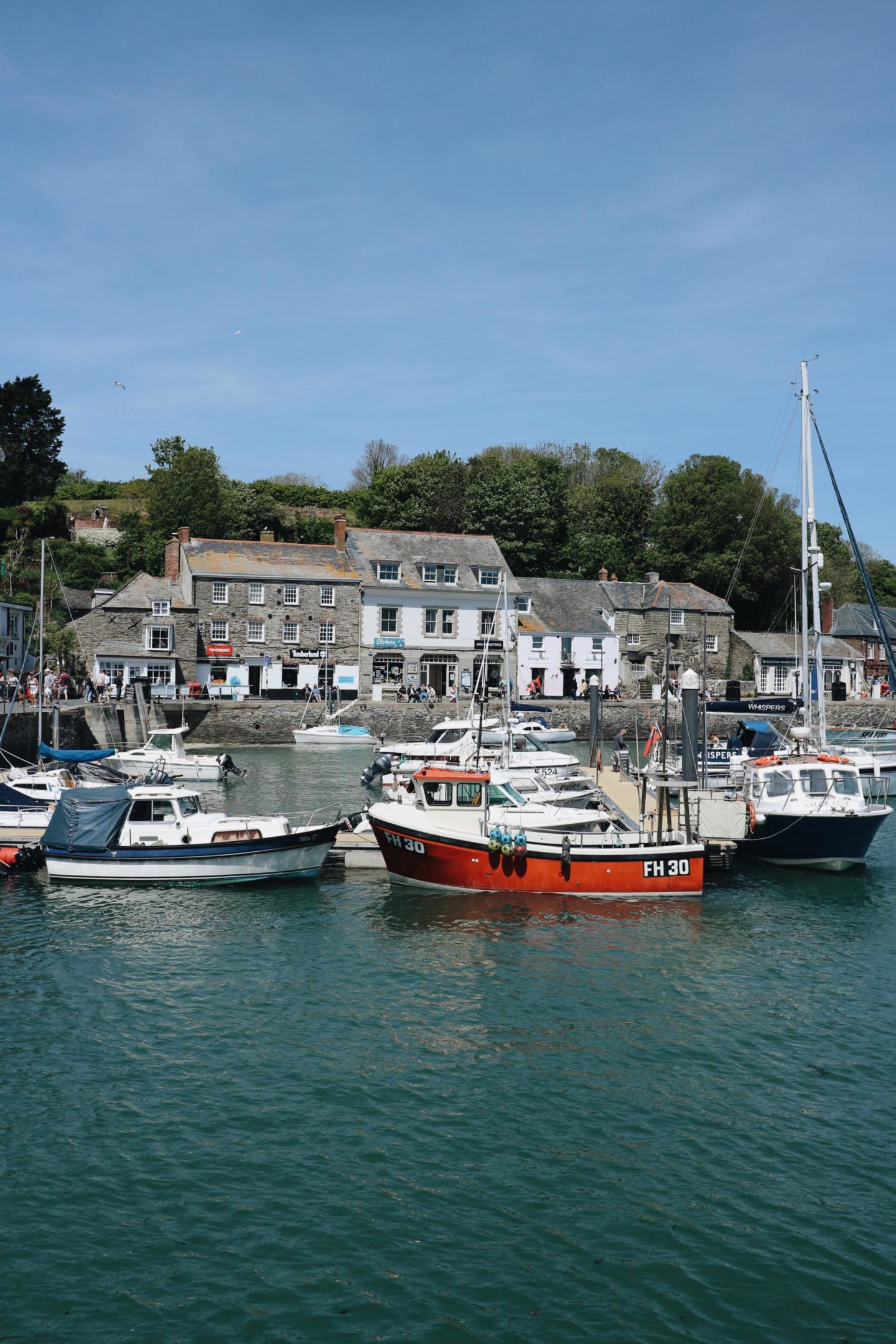 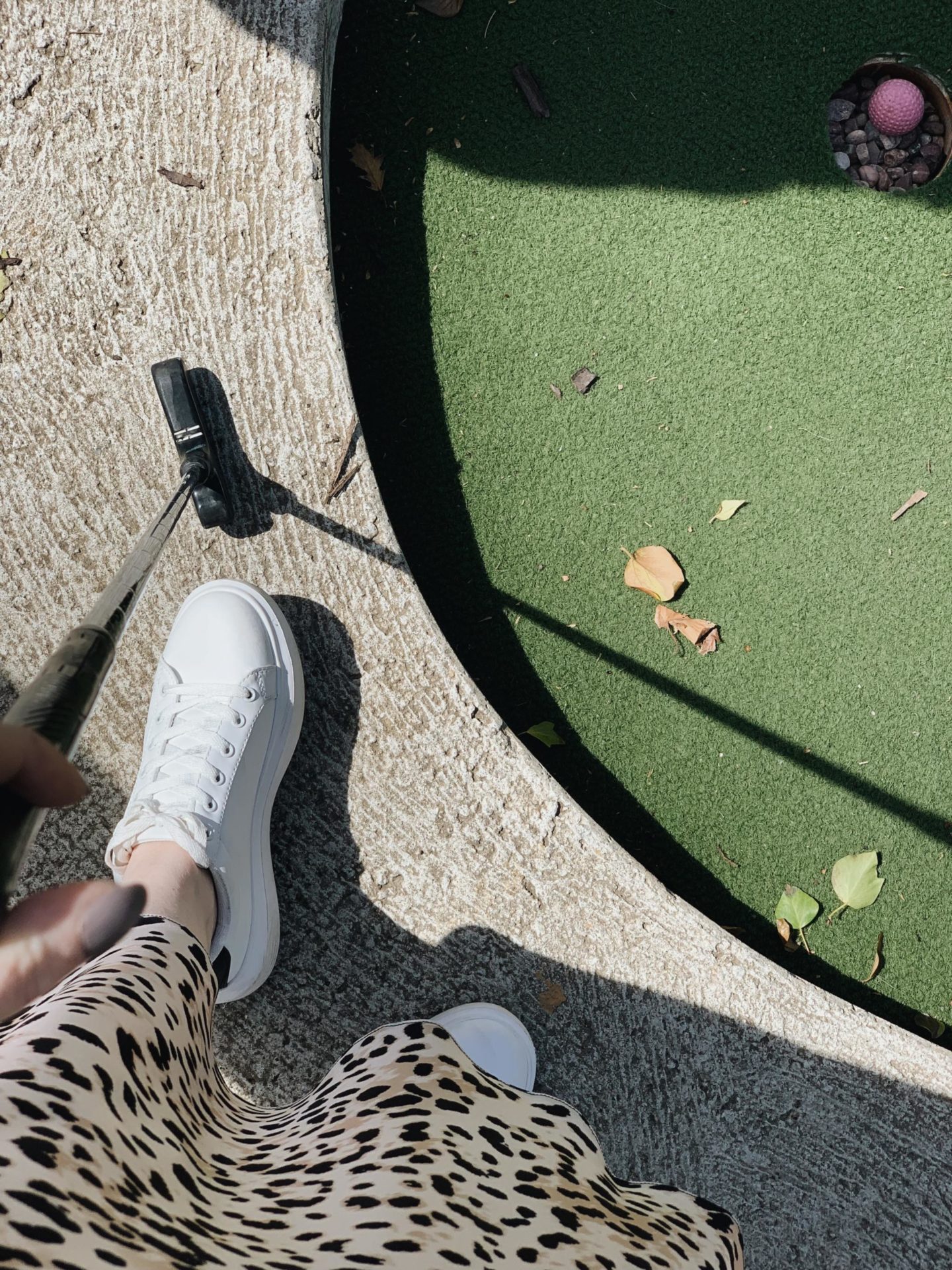 On the way back from Padstow we stopped at Trago Mills which basically sells brands at a discounted price and as it was literally on our drive home we thought why not? It didn’t look that big from the outside but omg it was MASSIVE inside, I have never been to a store that big before and it was empty, no-one was there.. Okay maybe there were a few people. I picked up a few things including some car mats (I know very random), a baby blue BUILT water bottle, and a couple more little things so it was a good little shopping trip. I’m pretty sure I went to bed early that night because I was exhausted.

I’m going to leave part 1 here as it’s already longer than I thought it was going to be and I’ll see you soon with part 2 of my week in Cornwall! 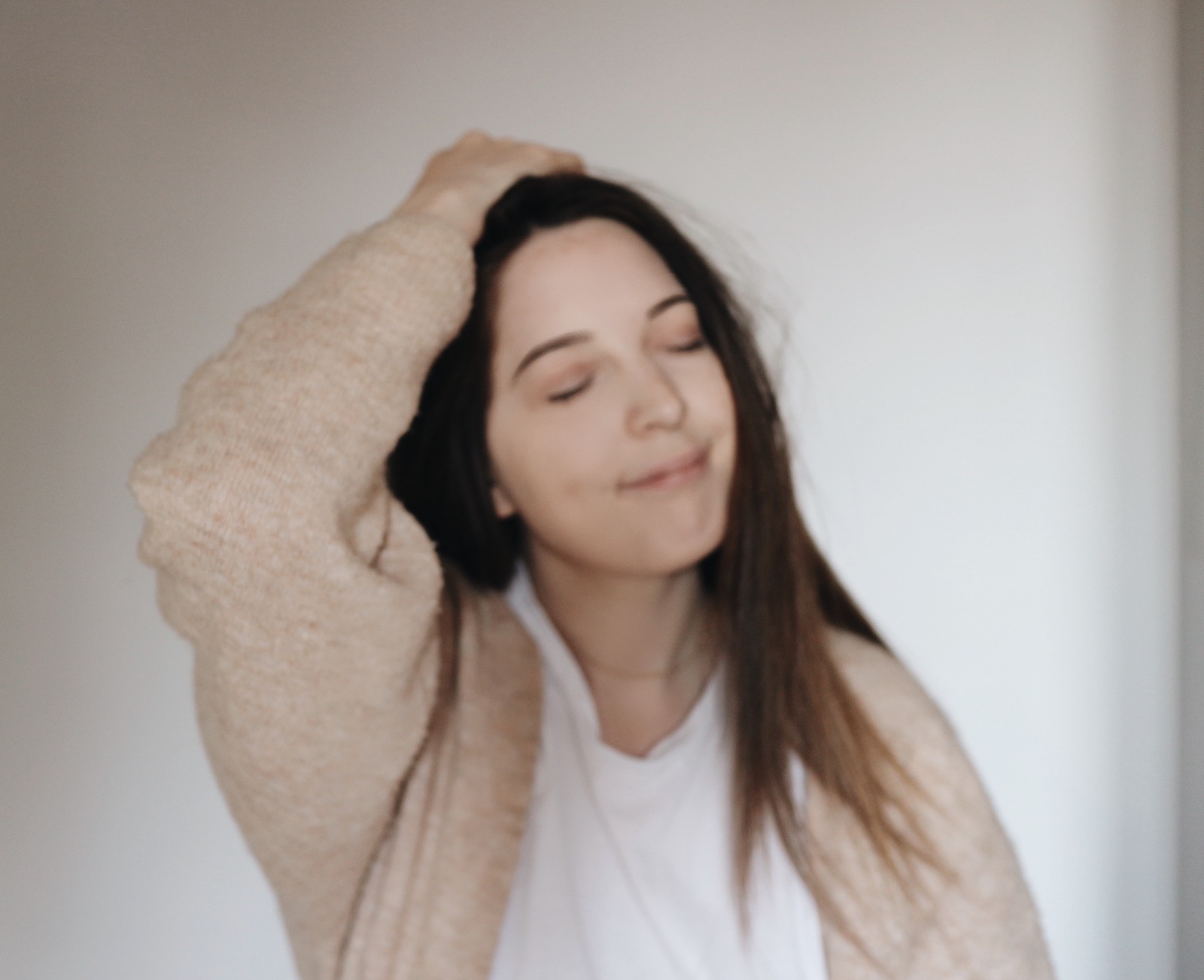 Gifted • We all need that extra glow in January,